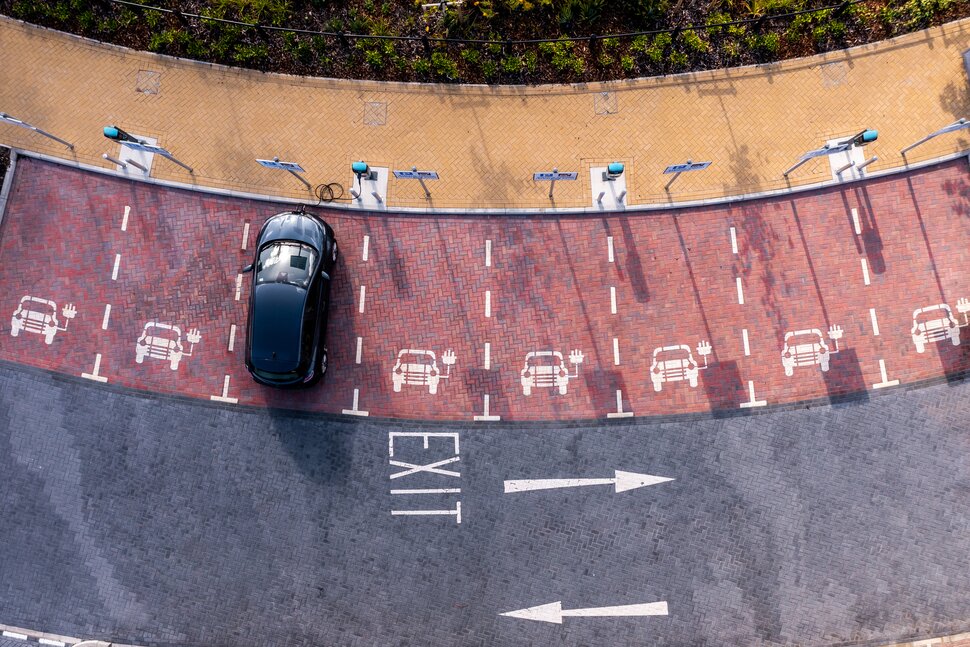 Photo: An aerial view directly above an electric vehicle charging station with electric car charging in a parking space

Beyond electric vehicles, lithium is crucial for the batteries in utility-scale renewable energy projects.(GETTY IMAGES)

In a sign of how dependent the electric vehicle industry is on lithium, Tesla Inc. (ticker: TSLA), the world’s biggest producer of such vehicles, is considering building a facility to produce a lithium compound to use in its batteries.

To be located in either Texas or Louisiana, the facility would refine raw material into lithium hydroxide, a commodity that has increased in value by more than 130% this year, according to Benchmark Mineral Intelligence, because of short-term factors boosting input prices and the long-term outlook for growth in the global electric vehicle market.

«The final product, battery-grade lithium hydroxide, will be packaged and shipped by truck and rail to various Tesla battery manufacturing sites, supporting the necessary supply chain for large-scale and electric vehicle batteries,» Tesla said in an August-dated letter asking Texas officials for favorable tax treatment for the facility.

In addition to batteries for electric vehicles, lithium – a soft, silver-white mineral – is also crucial for the batteries in utility-scale renewable energy projects, making the lightest metal on earth indispensable to the global energy transition away from oil, natural gas and coal. Also, it’s worth keeping in mind that lithium is used in batteries for personal electronics, so investors will want to keep an eye on the growth prospects for that market, too.

With this type of demand outlook, investors are becoming more interested in the metal. Here are three ways to invest in lithium:

As with other commodities, such as copper or oil, there are futures contracts for lithium. These types of contracts allow people to buy or sell a certain amount of a commodity at a certain price at a certain time in the future.

Futures are often used by production companies to hedge changes in price in the commodities they produce. Speculators also use futures to try make a profit on bets of whether a commodity’s price will rise or fall.

CME Group, the London Metal Exchange, the Singapore Exchange and the Wuxi Stainless Steel Exchange in China all offer futures for lithium products.

While these contracts give investors direct exposure to lithium hydroxide and lithium carbonate compounds used in batteries, they can also be volatile and have low volume. So most investors will probably want to put their money in the stocks of lithium producers instead.

Like with other mining sectors, lithium producers range from well-established producers to companies called junior miners, which explore for the metal and try to develop mines. The former offer relative stability while the latter group is more risky but can produce spectacular returns for investors if their exploration efforts pan out.

Both types of miners offer exposure to lithium, but they also come with risks that go beyond boom-and-bust cycles in the metal’s price. Mining companies also face the risk of bad management decisions, heightened costs for borrowing as interest rates rise, and permitting delays or denials. Lithium producers also face smaller margins when input costs rise faster than the price of their product.

Here’s a look at some leading lithium stocks to consider:

The U.S. lacks significant lithium processing capacity compared with China, and Washington is supporting companies like Albemarle to ensure greater energy independence. Last month, Albemarle said the U.S. Department of Energy awarded the company a near-$150 million grant that will go toward building a new lithium concentrator facility in North Carolina.

Additionally, the company has announced a major lithium processing plant in Arizona, to be supplied by lithium ore from North Carolina. The company is also looking to scale up its extraction operations in Nevada.

Albemarle is one of the largest producers of lithium in the world, in addition to being one of the most vertically integrated with mining, extraction and purification operations.

Although Albemarle is one of the key companies in the U.S. lithium industry, it’s not a pure play. About 25% of its net sales come from bromine and 15% come from catalysts.

Livent Corp. is a purer play. Nearly half of its 2021 revenue of $420 million came from lithium hydroxide, with lithium carbonate and lithium chloride making up 17%. When looking at its revenue stream by application, energy storage, including electric vehicles, made up 57%.

The company recently inked a long-term supply agreement with General Motors Co. (GM) to deliver lithium hydroxide starting in 2025. The deal comes with a nearly $200 million advance payment from the automaker this year.

«The challenges are increasing for the lithium industry to grow battery-grade lithium hydroxide and carbonate supply enough to keep up with significant annual demand increases,» Livent CEO Paul Graves said in a press release accompanying the company’s second-quarter results in August. «As a result, auto OEMs are becoming more focused on securing reliable lithium supply to support their own aggressive electrification plans.»

Amid the strong demand outlook, Livent is expanding its capacity. Expansion plans include a 10,000-metric-ton expansion of lithium carbonate in Argentina to be in commercial production by the first quarter of next year and an additional 10,000 metric tons in the country by the end of next year.

Lithium Americas has projects in Argentina and the U.S. that are moving toward production.

In Argentina, the company has a partnership with Ganfeng Lithium, a Chinese company and one of the largest lithium mining companies in the world, offering some risk mitigation for a company not yet in production.

Lithium Americas is getting there, though. Construction at one of its Argentina properties is 90% complete, and the company said it will prioritize production over completing all of the property’s purification circuits. Production will give the company cash flow and reduce its risk profile.

The company’s property in Nevada is the largest known lithium resource in the U.S., and it is there that the company aims to produce the first carbon-neutral lithium products in the industry. The property has passed a key permitting milestone, although that decision is being appealed. It has faced opposition from nearby native tribes and ranchers.

Such resistance can be common in the mining industry, underscoring the homework investors need to do when it comes to miners and their projects.

One way to hedge against risks is to own multiple companies packaged in an exchange-traded fund, or ETF.

These funds own stock from multiple companies and trade under a single ticker symbol, offering diversification among individual companies with their various fundamentals and geographic concentrations.